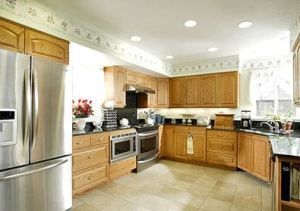 How do you like the kitchen, they ask. It’s a great kitchen, they tell her.  A really great kitchen.  Great lighting, don’t you think.  And all of the work surfaces.  Imported granite, of course.  And the cabinets  – just look at those glass front cabinets.

She listens dazed with the brightness and the whiteness, the shiny opulent cleanness of it all.  There is nothing to complain about in this kitchen.  The walls are not painted yellow like the color of a throat, infected from its own screaming.  The floor is not peeling linoleum. There is no basement door poised like a dark mouth at one end of the kitchen.

She knows how one is supposed to answer such questions that are not really questions but statements that are like tops, spinning in the air between them, needing the friction of her enthusiasm to stay upright.  Often she felt such pressure to keep the conversational tops spinning that she talked too much, seeming more enthusiastic than she really was about things like quiet technology dishwashers and energy efficient refrigerators.  Then when she didn’t like the house enough to make an offer the agent would act like a high school boy expecting sex on prom night and then his date barfs in the rented limo.

A real cook’s kitchen, they say to her in prodding voices.    The Wolf range, they say, and the island and the West African tile….!  They look at her expectantly  and she feels like a wildebeest on the veldt, no dark corners to hide from whatever might be stalking her.

And there is no old orange odor of  spaghetti sauce. There is no gray dishwater in the sink, no repulsive scraps of food floating on the dead, grease-speckled surface.

But each time she opens her mouth to say something, anything  that that will keep the conversational top spinning on the imported Italian marble floors of this blameless pristine gourmet kitchen, she gets distracted by the silence.  It is not the silence between one scream and the next.  It is not  a silence that will pool like a bloody halo around a head cracked at the bottom of the steps.   It is not a silence punctuated  by the sound of her father’s angry after- breathing, his oboe, her flute.   But still  she  finds she can’t stop listening to it, that silence in the kitchen.