That pretty much sums up what you’ll find here, but I’ll add to it —  that if I fail to terrify, horrify or gross you out, I’ll at least strive to make you uncomfortable. Rely on it.  So if that’s not your thing, well, all I can say is, welcome to the Caveat Emptorium.  Watch your step.  Here there be gooshy stuff.  If it IS your thing, well then, welcome! Check out my Patreon page. 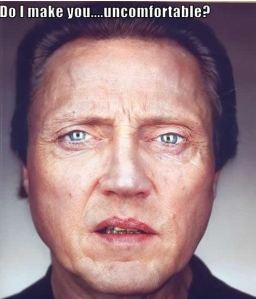 I left off the end of King’s quote, which was “I’m not proud.”   That sounds like he’s being funny, but I suspect he was only being funny in part.  In On Writing (the best book for writers that I’ve ever read), King talks about how for too many years he felt embarrassed by what he wrote – or, more specifically, he felt embarrassed by the insistence of the market that any genre writer feel embarrassed for putting out genre fiction  — as far as I can tell, genre is the word they stick in front of fiction to distinguish it from literary fiction i.e.  “real” fiction.   Why horror  is somehow less ‘legitimate’  as a genre for serious writers has never been clear to me. Note to literary fiction agents reading this: when the zombie apocalypse is upon us, I hope you won’t  be expecting me to help save you, even if my front door is the only thing between you and being lunch for a horde of the reanimated dead.   I’ll be all “I believe I covered the ‘what to do, what no to do’ in this situation in one of my stories -you know, the one you wouldn’t publish because it was genre fiction?  Good luck with those zombies!  Buh bye!” I think Stephen King should be proud of what he’s accomplished for the genre.  Certainly he’s made it more legitimate for the rest of us to claim a seat at the table where the dark feast is being served.  And dismissing him as a genre writer ignores the beautiful character development – the soft chewy center of every great story ever written –  that drives all of his stories and makes him a great writer. From the beginning, my fiction hissed with menace.  The first short story I ever wrote – I was about 11 – was of a little girl’s doll that comes to life and kills her.   I’ve long since lost those hand printed pages but I’ll probably take a stab (heh) at writing it again.  Most of my stories start with a visual – a sort of snapshot of a scene. In the case of this one, I see a little girl standing at the doorway of her bedroom, looking at her bed, where  a doll leans on the pillow, surrounded by a menagerie of stuffed animals.  The doll is smiling, and the little girls is trying very hard to remember if the smile has always been there. It has,  hasn’t it?  Her heart is beating fast and she is sweating –  her subconscious in a desperate attempt to tell her what she won’t let herself know, that of course the doll had never been smiling before, but it was smiling now. And there was the way the stuffed animals seemed to be in slightly different positions than when she’d made the bed — the way they seemed to be almost leaning away from the doll.   While she’s noticing this fact, the little girls is trying to suppress the memory of the sound she heard last night, and pretend that it had been just a dream… but her ability to pretend is no longer working quite so well (possibly because she is getting so little sleep) and the doll, she thinks, somehow knows this, and maybe, just maybe, that is why the doll is smiling.   I think the title of the story is going to be Audrey.  After the doll, of course. That exact picture was in my head when I wrote the story at age 11 or 12, and it’s the same picture I see now when I shuffle through the box of polaroids that is where all my story ideas are born. There are some great pictures in there.  A naked steaming gargoyle-like creature with leathery skin, sitting on a rock, a solitary man on a ski lift catching sight of it as he drifts toward the top of the mountain where he’ll have to ski down, past the creature. There’s another,  a snapshot that includes a few of those big round concrete tubes you’d see on a dig site where they are  installing sewer pipes.  It’s early evening and there is  a girl  – aged 13 or 14 – standing across the street staring at them. She looks afraid. In another picture, I see a boulder field, the terrain somewhere in the Sierras.  There is a man made clearing, and four boys are standing in a rough circle, ranging in age from 15 to 18.   There is a girl lying on the muddy silty ground at their feet.  She is caked with mud, and her skin glows shockingly white in the late afternoon winter sunlight. I’ve flipped through these photos in my mind innumerable times, and I look forward to writing the stories behind them, when they (the stories) are ready to be told.  Then the pictures will go away, replaced by new snapshots of new scenes.  They are all very different from one another, but share one thing in common – they make me uncomfortable. A feeling I’d like to share with you, dear reader.   Thanks for visiting my website.  Stop by and make yourself uncomfortable anytime.
————————————————————————————————————————————————————————-
Thank you for supporting my writing!
Your small donations make my writing career possible.
$5.00