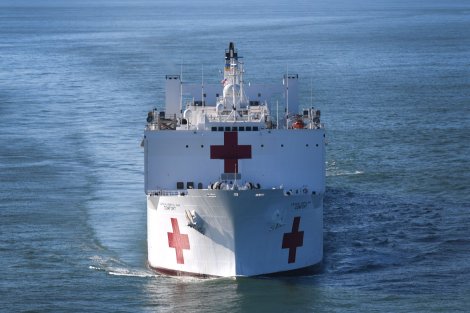 Saturday March 28: in which the worth of oil becomes the mercy of care

The hospital ship the USNS Comfort has been dispatched to New York, while the USNS Mercy has arrived in Los Angeles amidst the news that we (California) “are now seeing the spike that we were anticipating,” according to Governor Gavin Newsom. Based on current trends we may be seeing cases double every two days, quickly catching up to New York. The Mercy means 1,000 extra beds, but Newsom says the state could need 50,000 more, and will be converting the Los Angeles Convention Center into a field hospital.

Ventilators, ventilators, ventilators, every state is in desperate need of ventilators for patients and personal protective equipment for healthcare workers. The federal government was stingy with ventilators to California, and the state of Michigan is in the uncomfortable position of a nice guy at a cocktail party whose date keeps being referred to by the host as “that woman from Michigan”. (I told Mike Pence not to call her, President Trump confirmed to an incredulous reporter, because apparently getting assistance for your citizens by an elected official is “a two way street”).

Italy reports another 832 deaths in the past 24 hours, bringing the death toll to 10,000. You can’t think about this too long without first the sadness, then the fear, overrunning you.

In response to the hordes of people that continue to go on walkabout enjoying the great outdoors, parks and trails. beaches and playgrounds are closed throughout San Francisco. Yesterday when I took my dog for a turn around the block I dodged sixteen different people, and I am happy to report the dodging is now definitely mutual, though I didn’t see a single person wearing a mask though I know I live among prolific hoarders of same.  There is talk of the city tripling its testing but without knowing how many are being tested and under what conditions, it’s just a case of more information but not enough data.

Speaking of data, a new model by the University of Washington projects COVID-19-related deaths by state, estimating that April 14th will the country’s peak with 2,341 deaths projected (vs. 2,032 deaths in total for the country at this writing). The peak for California is expected on April 24th. The Journal of the American Medical Association projects the virus will be with us, requiring continued social distancing, until August.

The hospital ships are big white affairs with red crosses painted on them. Although they seem like World War II era (I’m not sure why), they in fact started life as oil tankers and were converted to hospital ships in the 1980s. Back then, the Mercy was named the SS Worth, and it could fill one with a cautious optimism, couldn’t it, the ease with which we made the transition from a vessel holding the Worth of oil to the Mercy of caring.

In other news, not everyone trusts the good Dr. Fauci, praiseworthy mouthpiece of  the pandemic. It is a reminder we don’t need, that the internet is Brits leaning out their windows clapping for NHS workers and Italians serenading the empty cobblestone streets of Lombardi but is ALSO, still,  a filthy cauldron full of trolls rampaging around our social media feeds, promoting the hashtag #FauciFraud. The New York Times reports that some accounts are tweeting as frequently as 795 times a day which is more tweets I’ve ever composed in a day even as a professional social media community manager. The trolls are nostalgia-driven, reviving all the hits (“Dr. Fauci is in love w/ crooked @HillaryClinton. More reasons not to trust him.”). I wonder if trolling will get a million times worse now that so much of our interactions are  being driven online, where viral outbreaks are not only common but sought after.

Good things:  Golden State Warrior Steph Curry talked online with Dr. Fauci, who has a nerf hoop in his office.

See past entries in Coronavirus Event

One response to “The worth of mercy”