Monday March 23: in which we choreograph our social distance; the full parks are ordered emptied; financial collapse speeds up

I took Jake for a walk. Normally, the sidewalk in front of our house has scant foot traffic, with only the occasional high school student headed for the bus stop or another dog walker passing by.  The street, however, is a different story – it is one of the main thoroughfare connectors to the bridge, and is often so congested the exhaust sets off the  Hepa air filter in our living room to running high with a flashing red warning light, a full three stories above.

This past weekend, It’s been opposite world; the streets are as empty as the busses whooshing by, but the sidewalks are a totally different story. Sheltering in place has brought my neighbors stealthily to the surface, the way the foam emerges when you pour a Guinness. The restaurants and bars might be closed and the hotels empty, but the parks and public spaces over the weekend were really hopping here in the Bay Area and my street is no exception.

I look up and down the sidewalk: northbound, I spot three couples about twelve feet apart; southbound, there are two couples spread out, one with a dog, one with a young boy, both gaining on us fast.  I quickly choose northbound and merge, timing our walk to keep us twenty feet from the closest couple, who turn left at the corner. Normally we’d proceed straight, but another couple coming from the east was now turning right on the north side, so Jake and I stayed on the south side and headed east. A block ahead, there were at least four people walking in a loose group, but they’d have to cross the street well before we caught up to them.

And so it went at every corner, this curious waltz of the walkers, people turning at right angles to avoid one another, no one breaking stride. At one intersection, there were two people crossing each crosswalk, and I briefly felt like I was in a music video. The social distancing gives our movements relative to one another an odd formality, a kind of stylized grace. One wants to set a metronome ticking. I mentioned this impression to the h and he nods. “It’s like that painting, Sunday in the park – everyone out but not really interacting, as if they aren’t real even to each other.”

Curious about the name of the painting, I googled it and found the h’s assessment was akin to the art historian who wrote the Wikipedia page for Georges Seurat’s “Sunday Afternoon on the Island of La Grande Jatte”, who interprets the girl at the center of the painting – the sole figure gazing at the audience, and not in shadow – as asking the greater social question “What will become of these people and their class?” Seurat, the historian believes, paints their prospects bleakly “cloaked as they are in shadow.”

If you think that places too much focus on a single actor in a tableau, I invite you to watch this.  Go ahead, I’ll wait.

On Bay Area beaches the well-to-do are cloaked in fleece rather than shadow; Marin County beaches this weekend look just like a Seurat painting, if Seurat were from the Pacific Northwest and favored Patagonia microdown.

On a normal Sunday, most of these people would not be in evidence; they would be traveling to their vacation homes in wine country or the East Coast, to Tahoe or Colorado for a week of spring break skiing or beachcombing. Now of course, nothing is normal; staying home for the weekend to watch sports is not even an option, with everything from March Madness to the MLB,  NHL and NBA seasons suspended. And with Marin County announcing  it is closing all federal, state and local parks, I expect the Jatte Ballet of the sidewalks is about kick up a notch. 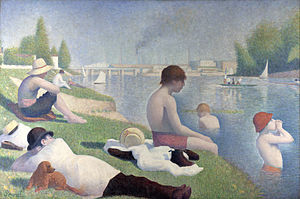 We are the future, come and join us!

An interesting thing I discovered about Seurat’s Sunday in the Park painting – it represents a mirror impression from another painting by Seurat called Bathers at Asnières, completed shortly before Sunday; in it, a boy bathes on the other side of the river bank, calling over to the socially distanced people in Sunday in the park – in one art historian’s words –  as if to say, “We are the future. Come and join us”.  I wonder if  Seurat’s pensive outlook for the monied classes was a product of his time – the painting was made just after the Long Depression that lasted from  1873 to 1879 – that’s 65 months, the longest-lasting contraction in our economic history, even eclipsing the Great Depression (which featured 43 months of contraction). During that time in the US, ten states, hundreds of banks and more than 18,000 businesses including 89 railroads went bankrupt, and unemployment ranged from 8.25% to 14%. It has been described as “the first truly international crisis”, even closing the NYSE for ten days.

In 2020 we again face a crisis of worldwide proportions. The International Monetary Fund announced today it expects the coronavirus pandemic to cause a global recession in 2020, predicting the downturn to be ‘as bad or worse’ than the financial crisis of 2008.  When I read that, I remember how Citigroup, one of the biggest recipients of US government bailout money in 2008, that same year gave employees $5.3 billion in bonuses, with 738 staff getting more than $1 million apiece, and I just have to wonder: worse for who?  Even as the relief packages put forth by Congress propose to financially insulate whole industries, the public drumbeat for a cash bailout of citizens is mounting.  One feels we are at a cusp not just in American, but human history.

Good things:  The sight of so many family groups together is strengthening; hearing the voices of my neighbors, the childish treble of the son, asking question after question, counterpointed with the baritone of his dad, patiently answering, is heartening in a way I can’t describe; when a planeful of Cuban doctors disembarked in Italy, people stood and clapped and I cried.