Last year at the Oslo Freedom Forum, a man named Fred Warmbier took the stage. It was a bit strange to see a middle aged white American male on that stage. The Oslo Freedom Forum is put on by the Human Rights Foundation, an estimable organization founded by a Venezuelan five days after his mother was shot dead by government forces. The HRF supports the spread of democracy by bringing attention to everywhere democracy is not, especially authoritarian regimes and dictatorships-in-the-making.

The OFF is a two day affair of speaker after speaker delivering carefully prepared 9 minute talks on their experiences with these regimes, and the stories are like a blunt force trauma to the heart, so beyond harrowing are they.

One by one they take the stage. There is the North Korean girl, thin as a twig from years of malnourishment, who escaped across the border to China and in the process had to endure not only her own rape by Chinese border guards, but also that of her mother. The politician, duly elected, kidnapped in the dead of night by government forces, beaten for days; the persecuted religious minority disappeared and tortured, released a year later, her face aged decades; a man who had his legs run over by a tank during the Tiananmen Square protests, now denied by the very people who saved him, so afraid they are to cross the party in power today because the past is never really the past, see. The boy imprisoned as a child soldier, saved from that fate, now finding his way in a world where his skin color, for many, dictates a fate not so different from the one he escaped.

These are the stories you hear from the people who managed to escape the most dangerous places in the world, places where democracy has already died, or never taken root. Where the bully, the narcissist, and the psychopath reign supreme, unchallenged. 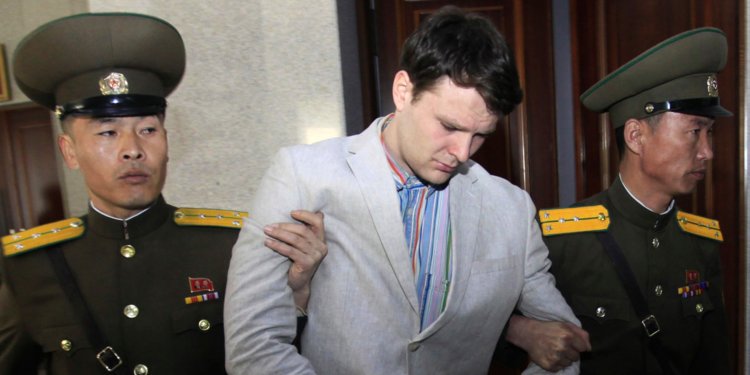 So Mr. Warmbier stood out for his American-ness, his middle class, middle aged dad body, his gentle demeanor. He was there to shine a light on the North Korean regime that killed his son with total impunity. In fact, high school aged Otto was taken prisoner by one of the men in this photo, below. The imprisonment lasted for 17 months, during which most of the time he was comatose, unbeknownst to anyone except his captors. Otto was released and put on a plane, still comatose, and died six days later without ever regaining consciousness Last year a U.S. federal court found the North Korean government liable for Otto’s torture and death, in a default judgment in favor of Warmbier’s parents after North Korea did not contest the case.

“My friend,” President Trump calls the man who killed Otto Warmbier, with warmth either real or feigned, does it matter?

Whenever I see Trump warmly greeting a strong man, cameras flashing and clicking madly, I imagine, below their extended hands, shaking and shaking, a different kind of audience, one that is silent, but observant, one that contains Jamal Khashoggi, Otto Warmbier, Óscar Alberto Martínez Ramírez and his baby daughter, Valeria. They can no longer speak but we can be their lost voices.

There is an audience, silent but restive, watching.