I’m not superstitious (much) but if the way the first day of 2016 has unfolded is predictive of the year I will have, then I will have a year where difficult things are easy, and everything is tastily designed just for me.

{I checked my horoscope and it’s pretty much confirmed – this is the year of the Sagittarius, for sure.}

After making lattes and getting a warm bowl of oatmeal with bananas walnuts and pecans served to me in bed by the matchless husband:

It was a relatively early start to the day, seeing as we were in bed by about 11p last night.  I am not much of a New Year’s Eve partier  and neither is the husband. My friend Ken says it’s a night full of amateurs, as in, amateur partiers.

This is funny I admit – especially the droll daddy-o way Ken delivers it – but I’m trying to get over that cold brand of humor, the kind that laughs at other people’s expense, even when it’s ‘harmless’.  When you start realizing you are, in fact, “other people” – we are all “other people” – your sense of humor shifts. 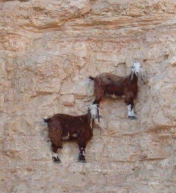 So yeah, I’m giving up the cold humor.

Not to get all preachy or anything.  Poor Ken was forced to go out every New Year’s Eve – he’s a musician and it’s like a Solemn Vow of the Ring or something that if you are represented by an agent and  you ever want to work in this town again, you gig on New Year’s Eve.

I say poor Ken but Ken is cool personified, all 159 bass playing pounds of him.  He used to tell me this anecdote, how he was playing one night with some really really old guy on piano.  The really old guy says to Ken, “Listen son I tell you what,

I don’t care how good looking she is, you can be sure somebody, somewhere is sicka her bullshit.

So midnight found us – the husband, Jake our 85lb Chocolate Lab, and me –  piled onto the bed and for a wonder the ancient radiator was spewing heat, and when the fireworks went off at midnight we might have (or it might have been a dream) woke up and kissed each other sleepily, Jake’s tail thumping once from the foot of the bed.

Earlier that day we went to see the Hateful Eight, which we mostly loved a whole lot better than the Star Wars remake, which is not an opinion we share around much because our taste in movies tends to skew dark.  It’s awesome to find a fellow horror fan in my life partner – we are few and far between in the parent class.

“Your life story? the mustachioed Russell blusters. “Am I in it?”
“You just walked in!” replies the man who may or may not be a cowboy.

It’s a great line and it is delivered with just the right twinkly malevolence, inviting us to be in on the joke.

It’s the fact that ‘cowboying’ something can reasonably  be defined as writing the story as it happens, that makes Tarantino in these moments feel like a genius. But maybe he just saw the same Night Gallery I did, where host Rod Serling narrates the story of a young Patty Duke who comes into possession of a pen that writes the future.

More specifically, the pen creates the future, with what it writes.  But the pen’s mistress ends up in an insane asylum, unable to convince them to bring her the pen. She cries and screams and begs, JUST BRING ME THE PEN, but they never do – why, a pen would be dangerous in the hands of a woman so obviously mentally ill.

Oh how I wanted that pen.   It was pre-Harry Potter magic  but no less fantastical than, say, string theory, which posits there are not just three but as many as ten dimensions, with each dimension like an alternate reality, but with different rules.

The way the scientist explained it, if you could master the fifth and sixth dimension, you could travel back in time or go to different futures.  Dimension #10 is, as I recall, the God dimension, where every possible timeline with every possible history exits.

As a writer this has no interest to me, for this is what I assume is present in my head, every day.  But in dimensions 5 and 6,  I could, say,  go back to a past where I do not marry so young, or where my sister is born whole and not needing years of surgery, or where my friend and running companion Karen does not die of ovarian cancer seven years younger than I am now.  I wonder if I woke up in either of these timelines, would I still be a baker?

I say I am not (much) superstitious, but really it does seem downright spooky sometimes, how connected everything is.  The other day I read this quote from Martin Luther King Jr., that he said that as his sufferings mounted he realized “there were two ways that I could respond to my situation: either to react with bitterness or

seek to transform the suffering into a creative force

Today I am realizing that this is the thing I’ve missed about running.  Not the running itself, but the way the act of running transforms the energy of stress into something else.  As I run, my worries, which are legion, are left behind.  They’ll be there when I get back so I do not worry about them or slow down for them to catch up.

Today’s run is no different.  The husband and Jake and I ran along together for about a mile before they turned back.  We were on a popular path, and several day hikers with dogs on leashes were about. 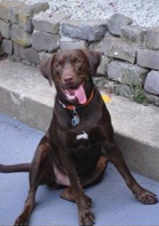 Watch out for the coyotes! warns one man; he gives the leash he is holding a yank, and the small white dog gasps.   Jake’s tail gives a brief, friendly wag before heading fearlessly into the brush. I bite back my desire to repeat the man’s warning about the coyote, a fellow I’ve seen, myself, on previous runs, always giving me a disinterested look. He is no match for 85 lbs of Jake and looks like he knows it.

I figured I was good for  about four miles, mainly because I’ve run only once or twice in – gulp –  the past six months.  But spending 18 hours on my feet at the bakery has kept me stronger than I realized, and I ended up going for 6.5 miles… in the hilly Presidio, no less.  Only a few aches and pains though tomorrow may be a different story.

{The biggest issue was the guilt — any time I feel even slightly relaxed and in the moment, my mind seems to feel an obligation to send me back to the green bakery floor}.

Running through the Presidio with its views of the Marin headlands snatched through redwoods, this landscape  is still otherworldy to my midwestern’s eye, with its training in long wide flat vistas of waving corn to the distant horizon.

The Northern California  trees twist and tower overhead and the ground does anything but lie a straight line to the horizon – here the earth itself soars into mountains and juts from cliffs that tumble to a crashing ocean below, all in the space of a few miles. 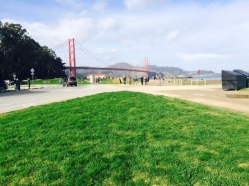 I run along glimpsing that red giantess of a bridge through the trees,  thinking as I always do on this run, huh, You would think something as big and orange and metal as the Golden Gate bridge would announce its presence as a manmade intrusion on all this beauty but the opposite is true, for it is as natural and beautiful to the landscape as the seagulls.

Straining up the long winding last hill home, as I have been thinking about Ken it is only right that I am accompanied by the most beautiful electric guitar solo ever written, The Cliffs of Dover by Eric Johnson.  One does not run along so much as flow inside a musical landscape the guitarist paints between your ears.

As always, as I run, I think/dream: maybe in another dimension, I am finishing slower, or faster; maybe I am not running at all and the idea of baking French pastry would make me laugh with incredulous joy.

And maybe in another dimension somewhere Karen runs on and on under a blue sky, thinking of me as she pounds down the trail, blonde hair flying, the yellow California sunshine warm on her wind-chilled face.